The creative team at Diageo (US) chose David Taylor to provide full production services for “Tales of Whisky” the popular series of videos featuring Nick Offerman. Filming on The Isle of Skye and Islay involved the movement of 25 cast and crew via road, rail, ferry and charter plane. Prior to the arrival of the team from the US, which included Producer/Directors Morgan Sackett, Dean Holland and Doug Smith, all locations on Skye where scouted and secured by ourselves along with appropriate accommodation and transport.

After a successful 3 days of shooting at a variety of locations on Skye, production moved to Islay. Heads of Dept and cast travelled by a plane chartered by ourselves, while crew and equipment travelled by road and ferry. In fact, due to the tight filming schedule, a separate crew from Glasgow travelled to Islay while filming was still underway in Skye.

Filming on Islay concluded at the famous Lagavulin distillery where Offerman sits in front of a New Years Party at 11.00pm for a full hour as the party gets more and more lively behind him. We were delighted to supply and construct the party set in front of the distillery and co-ordinate 80 local Islay residents to act as party guests. 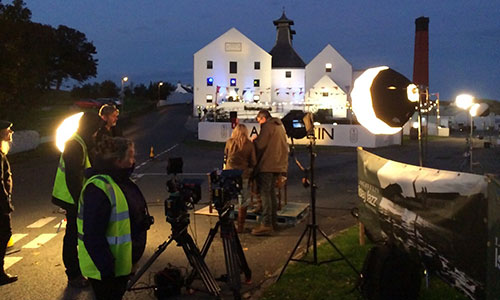 Smaragdgrün is the third in a trilogy of action fantasy features from writing/directing team Felix Fuchssteiner and Katharina Schöde. David Taylor provided production services for their seven day Scotland shoot.  There were 32 cast and crew members on the shoot with 20 German crew and David Taylor Events providing 12 crew, including Assistant Director Team, Locations Department and Production and hotel booker. The shoot took place in Glasgow, Isle of Skye and the iconic Cambasdaroch beach, as featured in “Local Hero” (pictured below). There were a few challenges on the job, like getting hotels and closing roads on Skye in the busy summer months. The biggest challenge was getting permission for the German drone team to shoot here from the Civil Aviation Authorities, which we did with days to spare. 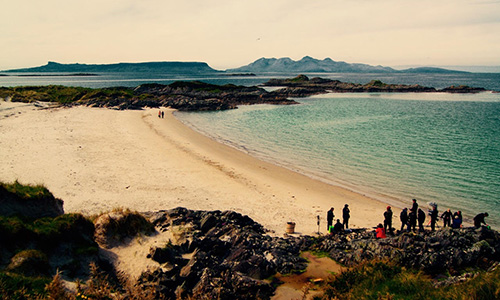 View on Imdb
View trailer for Smaragdgrün on YouTube

David Taylor was Location Manager for Christmas Commercial for retailer TK Maxx. There were quite a few locations to find including: roads, two houses, train station, train, airport interior and exterior. The plot was of family members returning home for Christmas. What made this a special challenge was that all the extra shots had snow in them, so there was a long process of getting permission for the snow effects team to put fake snow down and clear it up. The main location was a semi-detached house in Hamilton, Lanarkshire (pictured below).  We filmed there for two days and nights and on the road that was closed and covered in snow. 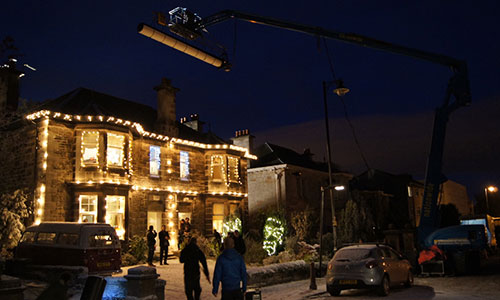